Since it was engulfed so quickly by a wall of volcanic mud, the city is extremely well preserved. Pompeii still has most of its buildings, streets, and even the volcano’s victims who died instantly and are preserved in ash.

The tragic story of Pompeii

The city is believed to have been founded by the Osci or the Oscans during the seventh century BC. Over the years the city prospered and grew with villas, monuments, and gardens. Pompeii was thriving when in 62 AD it was hit by a severe earthquake, damaging the city.

While the city’s inhabitants were still reconstructing the city after the earthquake, as it's believed that almost all the buildings had been affected, in 79 AD a tragic event that would annihilate the town completely took place. On 24 August, Mount Vesuvius erupted covering Pompeii in ash. On the following morning, a river of volcanic mud enveloped the city.

The remains lay forgotten until they were rediscovered in the sixteenth century. Excavations of Pompeii began in 1748 and over 45 hectares have since been unearthed.

Pompeii is very large, and tourists can visit numerous buildings in which residents went about their everyday life, including some temples, the basilica, the forum, and baths, as well as some of the most lavish homes decorated with frescoes and mosaics.

Many of the archaeological remains, including many of the bodies buried under layers of ash, are preserved in the Horrea and Olitorium.

Visitors will be able to see how the citizens would cross the roads using enormous stone crosswalks so that they wouldn’t get muddy.

Pompeii was a fascinating city and it's surprising to find it so well preserved. The town seems to still be inhabited since most of the buildings are just as they were when the volcano erupted. Even the paintings, frescoes, and other decorative elements of the houses are intact.

Probably one of the most hair-raising parts of the visit is the display of the victims of the explosion, which depict the terror they felt seconds before dying.

The three main ways to get to Pompeii from Rome are: 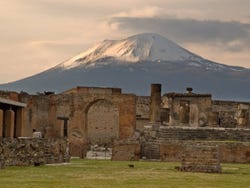 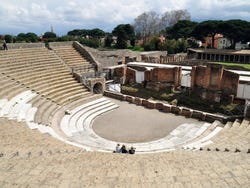 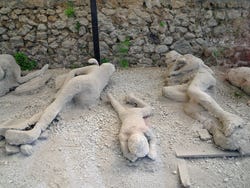 Plaster casts of the bodies found in Pompeii 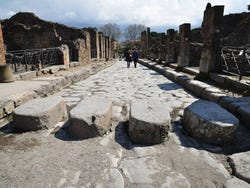 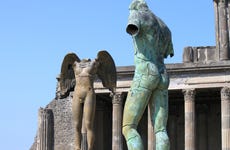 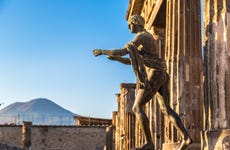 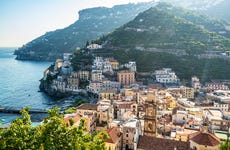