Founded during the sixth century on the remains of the Temple of Hercules Pompeianus, La Bocca della Verità is located on the Forum Boarium.

The name Cosmedin comes from the Greek word “kosmidion”, meaning ornamented, thanks to its beautifully decorated interior. Nowadays, the church is practically bare, although it still has some magnificent elements such as the floor mosaics, the bishop’s chair, the baldachin and the medieval choir enclosure.

Another treasure worth discovering is the glass shrine with the skull of St Valentine, patron saint of love, located on the left side of the church.

Next to the church’s porch is an impressive Romanesque bell tower built during the twelfth century.

The crypt, constructed in the eighth century, is located beneath the altar and was built to store the relics taken from the catacombs by Pope Adrian I.

The crypt is shaped like a small basilica. The side walls have several niches, each with shelves made of marble, where the different relics are displayed.

The church of Santa Maria in Cosmedin and The Mouth of Truth should be on all the visitor’s itinerary. 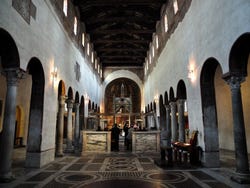 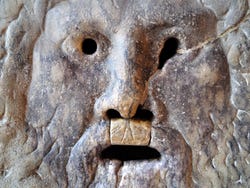