When Paul the Apostle was executed in the first century AD in Rome, his followers built a shrine over his grave. In 324 a small church was consecrated on the same grounds, which was later demolished in 386 to make space for the construction of a larger and more beautiful basilica, completed in 395.

The monastery’s striking cloister was built between 1220 and 1241. The cloister is one of the few parts of the Basilica which survived the fire of 1823.

After the fire, many countries made donations for the restoration of the church, which was reopened in 1840. The temple was later declared a national monument.

The interior of the Basilica of St. Paul is magnificent, with enormous marble columns and beautiful gold mosaics. Unfortunately, because of the fire of 1823, few parts of the Medieval basilica remain intact. However, the church still houses some mosaics from the thirteenth century, a large twelfth-century chandelier, or the marble tombstone under which the remains of St. Paul lie.

On the basilica’s walls, visitors will be able to observe the portraits of each of the popes, while a ray of sunlight lights up the portrait of the current Pope, Pope Francis.

The atrium located in the exterior is one of the most noteworthy parts of the church. It is made up of 150 columns, and from here, visitors can see the façade of the Basilica covered by an enormous golden mosaic built between 1854 and 1874, which reflects the rays of sunlight. The centre of the portico houses a colossal statue of St. Paul.

A little far away, but a must-see

Although the Basilica isn’t in the heart of the city, we recommend visiting this unique and astonishing church in order to see its impressive mosaics, atrium and interior. It is one of the most worthwhile of Rome. 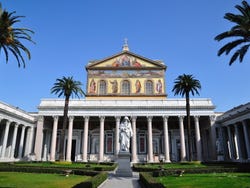 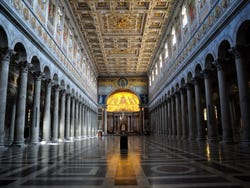 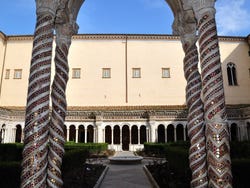