The Galleria Doria Pamphilj collection was started by Pope Innocent X Pamphilj in 1644. It currently consists of over 400 paintings dating from the 15th to the 18th century.

Oddly, the paintings are in an order that has not changed over the course of time. This can be proven through an 18th-century document that details the exact placement of each one of the paintings.

One of the most noteworthy works in the gallery is the Portrait of Pope Innocent X, by Velázquez, which shows the pope exactly as he was: an ominous and distrustful man. This led to a great deal of controversy at the time of its painting, given that other artists purported to idealize the pontiff’s characteristics in order to soften his sinister visage.

Despite the painting’s realism, the Pamphilj family keeps it in a special place, and it has had its own room since the 19th century.

In addition to the full gallery, within the palace you can also visit a small chapel and several private rooms that maintain their original decor and part of their furniture.

The Palazzo Doria Pamphilj maintains a good deal of its original decor and showcases a large amount of artwork. Nevertheless, the entry fee is too expensive relative to the quality of the exhibits.

Rome has important galleries that are superior to the Galleria Pamphilj. If you are not particularly interested in paying a visit, we recommend saving time and money. 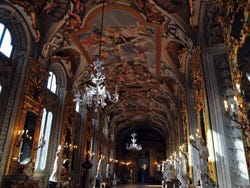 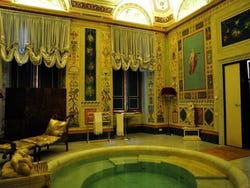