A number of important events took place at the end of the Roman Kingdom and beginning of the Roman Republic. In 509 BC, King Lucius Tarquinius Superbus was overthrown by the noble men of Rome. The king of Clusium, Lars Porsenna, sieged Rome. The city signed a treaty of support with Carthage, the temple of Jupiter Capitolinus was consecrated and a new office, called consul, was created.

The Fasti consulares (documents with the names of the consuls or magistrates that described the main events of the period) are essential to understand the Roman Republic from 503 BC, from when they are considered credible.

Another very important method used to understand this period of Roman history is the ritual of the clavus annalis. This practise began one year after the temple of Jupiter Capitolinus was consecrated and it consisted in fixing a bronze nail to the right of the altar once a year. The first nail was placed in 508 BC. The temple of Jupiter Capitolinus had the cella of Jupiter, as well as the cella of Minerva and Juno.

The decade after 509 BC (the year when the last King of Rome was dethroned, while he was away from Rome) is a dark period and very little is known, only isolated events.

Transition to the Roman Republic

The transition of Rome from a monarchy to a republic led to severe internal social tensions. This lack of control over the city led neighboring tribes to siege the city and reduce its power. This is why Rome had to ratify its identity in numerous occasions during the first seventy years of the Republic.

The early years of the Republic are of political turmoil. The population was divided, certain wanted a monarchy, others a republic, others favored the king of Clusium, Lars Porsenna, and others wanted to form part of the Latin civilization. The nobles who had overthrown the king and his family had not come to an agreement regarding the type of government that would replace the monarchy.

The consuls, which would later replace the leadership of the Roman kings, was not put in place immediately, but many years later.

Many historians believe that in the first stages of the Roman Republic, a praetor maximus was appointed for one year only. Later his duties would be split in two by choosing two consuls at a time to govern Rome. This form of government went on until 449 BC, with the Valeria Horaria law.

The position of chief magistrate was not exclusively for the “patres”, who formed the Roman senate, and controlled the army and the priests since the time of Romulus, as there is evidence that shows plebeians, common civilians, becoming consuls up until 485 BC. The political instability led the strongest factions to form alliances between themselves.

From 485 BC, the patricians no longer allowed commoners to take part in the government and began to control all civil and religious matters.

As well as the constant rivalry between patricians and plebeians, the Republic is also known as a period in which the power of Rome reached the whole peninsula of Italy and Roman law was founded with the Law of the Twelve Tables in 450 BC. Moreover, it is also a period when many wars took place for equality between the Roman inhabitants. The Twelve Tables were written up to appease the demands of the commoners.

Until the Tables were written, the Roman law was considered sacred, for having been established by the monarchy and pontiffs. By putting it on paper, it became the basis of all laws in the western world.

Between the years 133 BC and 27 BC Rome suffered from great internal tensions, leading to numerous civil wars. The Graco brothers, who proposed a series of laws in favor of the plebeians, also led to a social crisis in Rome.

Dictatorship: transition from the Republic to the Roman Empire

Sila, dictator between the years 82 to 79 BC, greatly influenced politics in Rome at the time, concentrating all the political power in the hands of the Senate.

To sustain the Empire the Senate was forced to choose a natural born leader, a General, who also understood politics to rule the people. During this period the plebeians wanted to seize the power, which led the dictator to be given more political power to ensure that they wouldn’t seize the control of Rome. This personalism resulted in a triumvirate political regime and the dictatorships of Julius Caesar and Augustus. A new form of government began in Rome, the Roman Empire. 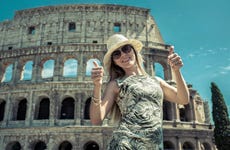