Information about the arch

Constructed from pieces of previous buildings, the Arch of Constantine is the most modern of the triumphal arches that were built in ancient Rome. It is 21 meters high, 25 meters wide and is made up of three arches.

In the reliefs on the monument, which were carved on blocks of marble, display statues taken from Trajan's Forum and some reliefs showing Marcus Aurelius distributing bread among the poor, as well as a representation of Trajan after his victory over the Dacians.

The inscription on the upper part, originally cast in bronze letters, states the following: "To the Emperor Caesar Flavius Constantinus, the greatest, pius, and blessed Augustus: because he, inspired by the divine, and by the greatness of his mind, has delivered the state from the tyrant and all of his followers at the same time, with his army and only the force of arms, the Senate and People of Rome have dedicated this arch, decorated with triumphs."

A strategic location in the city

The Arch of Constantine is one of the best preserved monuments from ancient Rome. Thanks to its excellent location it is one of the most representative and photographed points of the city. 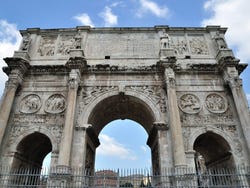 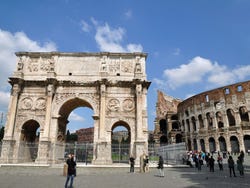 Arch of Constantine and the Colosseum
2See photo gallery

Next to the Colosseum