The Monumento Nazionale a Vittorio Emanuele was inaugurated in 1911 as a tribute to Victor Emmanuel II, the first king of Italy after the country's unification.

Inside the building is the Institute for the History of the Italian Risorgimento and the Central Museum of the Risorgimento.

Since 1921, the Victor Emmanuel Monument holds the tomb of the unknown soldier, a place in which the eternal flame shines and which is always guarded by two soldiers.

The colossal monument, which is 135 meters wide and 70 meters high, is comprised of scores of majestic Corinthian columns and endless stairs, all carved in white marble. The top is crowned with an equestrian sculpture of Victor Emmanuel cast in bronze and two chariots driven by the goddess Victoria.

The monument was strongly criticised at its construction, since it was necessary to knock down numerous valuable buildings to make sufficient space, and Italian citizens did not agree with the idea of having such an eye-catching and elaborate building next to the other classical buildings that surround it.

One of the greatest attractions of the Monument to Victor Emmanuel is the panoramic view that can be seen from the terrace located at the same height as the chariots. The panoramic elevators are the only way to reach the upper part of the monument, but the amazing views make it worth the effort to climb.

The Museum of the Risorgimento

The base of the monument holds the Museum of the Risorgimento; a museum dedicated to the unification of Italy in which weapons, flags and other objects related to this historic moment are exhibited. Though it may be an essential visit for Italian citizens, is not too interesting for foreign visitors.

The Monumento Nazionale a Vittorio Emanuele II is one of the most eye-catching buildings of the whole city. Its impressive dimensions and the sight of the sun reflected on its white marble make it the subject of thousands of photographs taken by tourists each day. 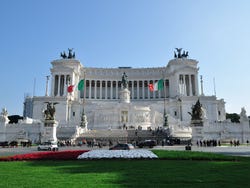 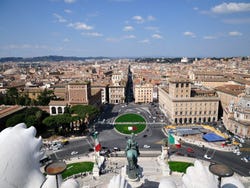 Views from the Altare della Patria 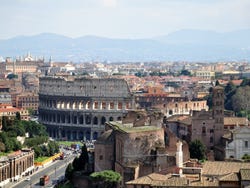 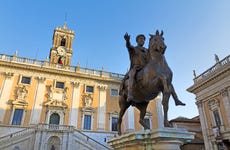