St. Peter's Square is one of the largest and most beautiful squares in the world. It is located in Vatican City, at the feet of St. Peter's Basilica.

The dimensions of the square are spectacular: 320 meters long and 240 meters wide. In the liturgies and more noticeable events St. Peter's Square has held more than 300,000 people.

The construction of the square was carried out between 1656 and 1667 at the hand of Bernini, with the support of Pope Alexander XII.

What to see in St. Peter's Square

The most impressive part of the square, besides its size, are its 284 columns and 88 pilasters that flank the square in a colonnade of four rows. Above the columns there are 140 statues of saints created in 1670 by the disciples of Bernini.

In the centre of the square the obelisk and the two fountains, one of Berni ni (1675) and another of Maderno (1614) stand out. The obelisk, which is 25 meters in height, was carried to Rome from Egypt in 1586.

The most spectacular way to arrive at St. Peter's Square is along the Via della Conciliazione, a long street that begins in the Castel Sant'Angelo. 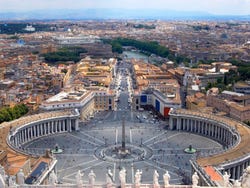 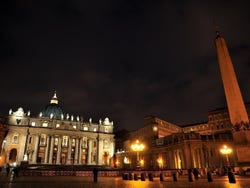 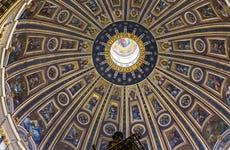