The Area Sacra was discovered between 1926 and 1930 during construction work on a building. The area was occupied by four temples built in the third century B.C., and by the Theatre and Curia of Pompey, the place in which Julius Caesar was murdered.

As it is not known to whom the temples were dedicated, they were renamed with the letters A, B, C and D.

The city of cats

Since the first excavations in the Area Sacra were carried out, hundreds of cats have decided to make the area their home. Nowadays it is very common to see them walking calmly, feeling protected among the ruins.

Next to the iron gates that protect the zone, signs can be seen indicating that the cats are welcome and that they should not be mistreated. These cats are so important for the zone that they even have their own web page:

The other remains of the temples that are preserved in the Area Sacra make up one of the most interesting areas of Rome. The ruins are especially pretty with the golden lighting that decorates them at night, while the cats hide among the shadows of the old buildings. 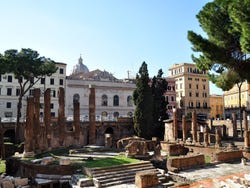