The National Roman Museum is located in four different buildings; the Baths of Diocletain, the Palazzo Altemps, the Crypta Balbi and lastly, the Palazzo Massimo. This last palace features one of the best archaeological and classical art collections in the world.

The Palazzo Massimo is also called Palazzo Massimo alle Terme due to its close proximity to the Baths of Diocletain. The villa is a superb Neo-Renaissance style palace, erected between 1883 and 1887. It was used as a Jesuit college until 1960 and in 1981 it was transformed into part of the National Roman Museum.

The various exhibitions of the Palazzo Massimo alle Terme are divided into different themes and organized chronologically throughout the four floors of the museum. The basement houses a collection of jewels, grave ornaments and Roman coins from different periods. This might be considered to be the least interesting floor of the museum.

The ground and first floor feature famous Greek and Roman sculptures and statues, as well as impressive sarcophagi and high reliefs.

The second floor showcases the best preserved Roman frescoes in the world, which are considered the highlight of the museum. Originally located in Villa of Livia and Villa Farnesina, these colourful frescoes,sometimes covering an entire room, represent different paradisiacal landscapes and domestic life.

On the same floor, visitors will also see an impressive collection of mosaics from the second and fourth century AD. 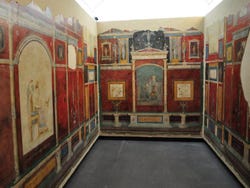 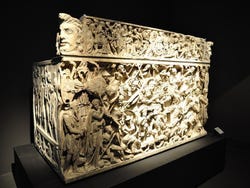 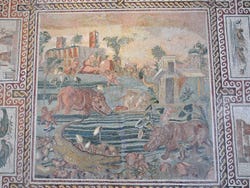 One of the mosaics in the Palazzo Massimo
3See photo gallery