The construction of the Roman baths began in 298 and was completed in 306. The structure of the baths was very similar to that of the Baths of Caracalla. They were made of bricks, coated in marble and decorated with mosaics and sculptures. The whole complex took up 120,000 square meters and included a gymnasium, a library, and cold, hot and tepid public baths.

During the construction, thousands of Christian slaves died. Diocletian, ill and tired, abdicated in 305.

The Roman public baths remained open until 537, when the Goths cut off the aqueducts in an attempt to conquer Rome.

In 1561, Pope Pius IV ordered Michelangelo to build the Basilica of Santa Maria degli Angeli on the remains of the baths to honour all the Christian slaves who died.

Open to the public after thirty years of reconstruction, the 10th Hall of the Baths of Diocletian were made part of the National Museum of Rome in 2008. Nowadays, only a small part can be visited, in which it is possible to see the high ceilings the baths had.

The interior of the remains includes an impressive funerary sculpture and two tombs decorated with frescoes and stucco, which are believed to date from the beginning of the second century AD.

In the outdoor part of the baths it is possible to stroll through a sixteenth century garden with nearly 400 works of art, including statues, sarcophagi and reliefs.

Even though the ruins show only a small part of the public baths complex, it is extremely impressive. Visitors can also explore the tombs, which are very well preserved.

Visiting the Basilica of Santa Maria degli Angeli in Piazza della Repubblica, you can get an idea of the enormous size of the baths. 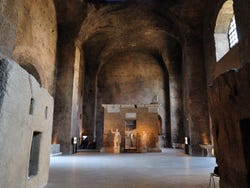 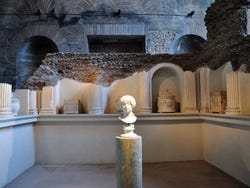 Exhibition in the Baths of Diocletian 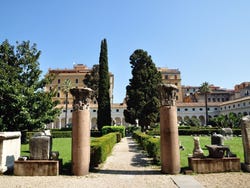 Cloister of the Baths of Diocletian
3See photo gallery