The Basilica of Santa Maria in Aracoeli is found very close to the Altare della Patria and is one of the most cherished churches by Rome’s inhabitants. The temple is also renowned because it houses the Santo Bambino of Aracoeli, a wooden figure of the Child Jesus, which is said to be miraculous.

Located south of the Capitoline Hill, Santa Maria in Aracoeli was built during the sixth century on the site of an ancient Byzantine abbey. During the ninth century the church was given to the Benedictines, and a few centuries later, was given to the Franciscans. These restored the church giving it a more Gothic aspect.

In 1797, during the Republic, the church was deconsecrated and transformed into a stable.

Nowadays, the basilica has been fully reconstructed and is one of the most visited in Rome.

Millions of tourists and locals visit the church to see the Santo Bambino of Aracoeli, a wooden image of the Christ Child, who is believed to resurrect the dead. The statue, made out of olive wood during the fifteenth century, was stolen in 1994 and was never recovered. A replica was made to substitute it.

The temple has 22 columns, none exactly alike, which were taken from Roman ruins. It is also worth seeing various burials and frescoes from the fifteenth century.

The wooden ceiling is decorated with paintings representing the Battle of Lepanto, where the Holy League defeated the fleet of the Ottoman Empire.

The Aracoeli staircase was completed in 1348 to celebrate the end of the Black Death in Rome. It is a marble staircase made up of 124 steep steps that finish at the entrance of Santa Maria in Aracoeli.

It is believed that all those who climb the stairs on their knees will win the lottery.

In the heart of the city

The Basilica of Santa Maria in Aracoeli is extremely well located, in the heart of the city, near the Altare della Patria. Therefore, stopping for a quick visit is very popular among visitors. 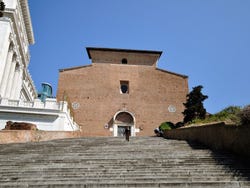 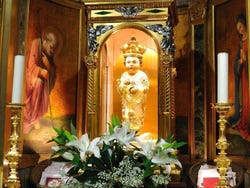 By foot from the Piazza Venezia