The Basilica is made up of three "layers": the present building founded during the Medieval period, the house of a member of the Roman aristocracy and a fourth century church which is underneath the basilica.

During the second century AD, the site on which the church now stands was occupied by a Roman mansion owned by Titus Flavius Clemens, one of the first Roman senators to convert to Christianity. The house was used for Christian clandestine worship, since being Christian at the time was forbidden.

Approximately a century later, a temple dedicated to Mithras, an all seeing Protector of the Truth, was built on the same site. It would remain in use for the performance of rites of initiation until the late third century.

On the second floor of the mansion a large room was built, which would later become a basilica commissioned by Pope Siricius after the end of Christian persecution in 313 AD.

It is believed that the church was badly damaged during the Norman sack of Rome in 1084. It was thus abandoned and buried under the level of the streets of the city. Years later, a new church, commissioned by Pope Paschal II, was erected on the same site and finished in 1108. It is the same that still stands today.

At first sight the Basilica of San Clemente looks like any other church in Rome. However, inside there are numerous and unimaginable treasures. The small temple is beautifully decorated with twelfth-century mosaics.

The entrance to the fourth century church is through the sacristy, in which, despite the cold, darkness and moisture, visitors will be able to see the numerous frescoes on the walls, as well as some fragments of mosaics that used to cover the temple floor.

Not only is the old basilica open, but visitors can also see the ancient Roman villas made of old brick. In one of the rooms water flows through the Cloaca Maxima, the main sewer system of ancient Rome.

A walk through the past

San Clemente is a unique attraction, definitely worth visiting. It not only offers a visit to a beautiful temple from the twelfth century, but visitors can also discover a fourth century temple and an old Roman mansion, walking down dark and humid passageways. 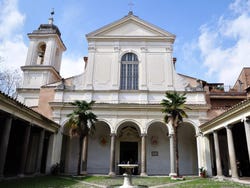 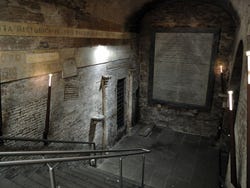 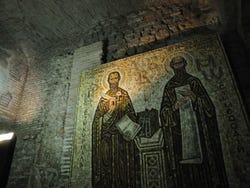 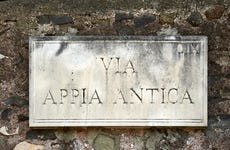