The Ara Pacis is an altar located in the interior of a closed structure carved in Carrara marble. It stands out because of its impressive decoration made up of various reliefs showing the family of Augustus in procession, in addition to different allegories related to the mythical foundation of Rome.

Ara Pacis in the past

Erected in the Campus Martius, the monument was dedicated to the Roman goddess of Peace. Each year, a ram and two oxen were sacrificed in the goddess's honour.

The altar was located in such a way that the shadow of the great obelisk located in the Campus Martius was projected on the Ara Pacis on the birthday of Augustus.

Due to the expansion of the river the altar was submerged in mud, where it remained for more than one millennium. It was not until the 16th century that part of the remains were found and in 1938 its reconstruction was carried out, preserving it until the present day.

Although the Ara Pacis is one of the most significant monuments of Ancient Rome, it is the only thing that is exhibited in the interior of the museum, making an entrance ticket quite expensive. It is best to look at the altar from the outside, as the building that contains it is made of glass. 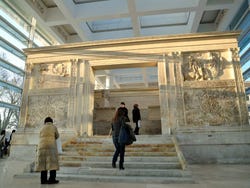 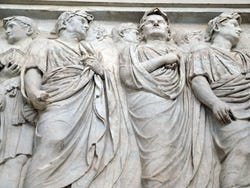 Lungotevere en Augusta. Next to the Piazza Augusto Imperatore.

Baths of Caracalla Mouth of Truth 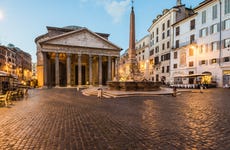