The temple, located very near Piazza della Repubblica, is one of the most surprising and unique in the city thanks to its ruined façade that contrasts with its vast and sensational interior.

Construction of the temple

The site where Santa Maria degli Angeli e dei Martiri was erected was where the Baths of Diocletian had been founded, an impressive demonstration of the glory of the Roman Empire until, in an intent to conquer Rome, the Goths cut the water supply of all the aqueducts of the city, and the baths had to be abandoned.

When neglected, the baths were taken over by bandits and courtesans until the Renaissance, when the grounds were bought by the French cardinal Jean du Bellay, who commissioned the construction of a beautiful villa and its gardens.

A Sicilian priest suggested building a church on the site of the Baths of Diocletian, in honour of all the Christian slaves who died while building the baths.

Several decades later, in 1560, the priest’s efforts were rewarded by Pope Pius IV who commissioned Michelangelo to transform the baths into a church.

The interior of the church is remarkable and completely unpredictable from looking at its bare façade.  With an impressive dimension, the temple is beautifully decorated with vast frescoes on its walls and enormous several coloured marble columns.

On the floor, visitors will be able to see the meridian solar line built by the astronomer and philosopher Francesco Bianchini in 1703.  Bianchini’s meridian would tell when noon was throughout the year, the arrival of the solstices and equinox, as well as a calendar.

Santa Maria degli Angeli houses an impressive orga, recently bought, with 5,400 tubes. It is capable of leaving the church’s visitors who are lucky enough to hear it spellbound.

There are countless churches of all sizes and from different periods in Rome, but, without a doubt, Santa Maria degli Angeli e dei Martiri is one of the most remarkable and impressive churches in the city. 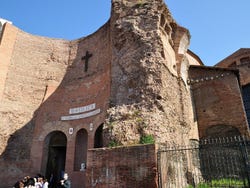 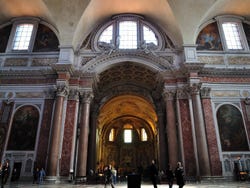