Construction of the building began in the year 135 under the direction of the Emperor Hadrian, who intended to use it as mausoleum for himself and his family. It was finished in the year 139 and a short time later, it became a military building, which in the year 403 would be integrated to the Aurelian Walls.

In the year 590, while a great epidemic of plague devastated the city, the Pope Gregory I had a vision of Saint Michael the Archangel on top of the castle, announcing the end of the epidemic. In memory of the apparition the building is crowned with a statue of an angel.

In the year 1277 an 800 metre fortified corridor was built that connected the castle with the Vatican City so that the Pope could escape in the event that he were in danger. During the sieges that occurred in Rome during 1527, the Pope Clement VII used the fortress as a refuge.

The Castel Sant'Angelo is split into five floors which can be reached by a spiral ramp that first reaches the chamber of ashes and subsequently the cells in which a number of historical figures were incarcerated.

Advancing toward the upper part of the castle you will find different rooms that functioned as a Papal residence, decorated with perfectly preserved frescoes from the Renaissance period, besides the extensive collection of weapons.

In the upper floor there is a large terrace where you can take amazing photographs of the city from above.

If you have enough time

Aside from the panoramic views and of some splendidly decorated rooms, the visit to the Castel Sant'Angelo is not really worth the time. You will find more spectacular rooms in almost any of the museums in Rome. 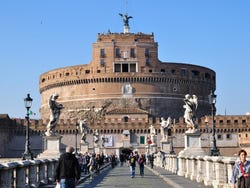 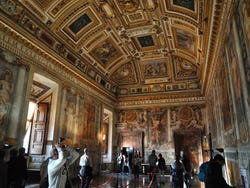 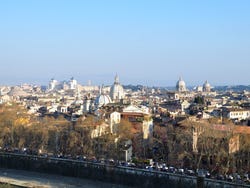 Views from the top of Castel Sant'Angelo
3See photo gallery 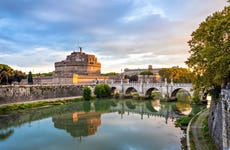