Discover some of the most symbolic sites in the history of Christianity. Explore the Roman Catacombs and two of the most important Basilicas in the world on this tour of the Eternal City. 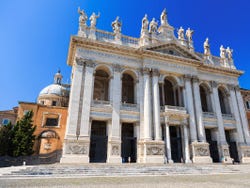 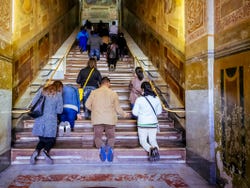 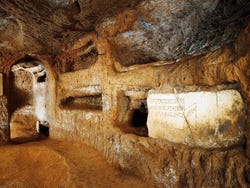 After being picked up from your hotel in Rome's historic centre, you'll head to the Basilica of St. John in Lateran. This church is one of the four papal major basilicas in Rome. These are the highest-ranking Roman Catholic church buildings, and they all possess a Holy Door and a High Altar at which only the Pope can celebrate Mass.

You'll then visit the nearby Scala Sancta, or Holy Stairs. Learn why these sacred marble steps are one of the main pilgrimage sites in Rome, visited by thousands of devout believers each year.

The next stop on your tour will be another of the major basilicas, St. Mary Major. Enjoy the magnificent artwork inside the building, especially its elaborate frescoes, and don't miss the famous icon of the Virgin Mary, now enshrined in the basilica's Borghese Chapel, which according to legend protected the city from the Plague.

Having explored the basilicas, you'll make your way to the historic Appian Way. On this iconic ancient road, symbolic of the Italian capital, you'll visit the Catacombs of Rome. These subterranean passageways were used as cemeteries and hiding places by early Christians, at a time when they were persecuted by the authorities of the Roman Empire.

The tour ends near the Piazza della Repubblica.

Hotel pick up and meeting point

If your hotel is located in the city centre, you can book the pick-up service. The bus usually takes around one hour to pick up all of the passengers, subject to traffic conditions and the number of passengers booked onto the tour. For this reason, pick up times will start from 1:30pm (1pm from 1st November to 31st March) and will continue thereafter in order to be on time for the beginning of the tour.

Tour with pick up

Tour without pick up

It is compulsory to display a complete Covid vaccination certificate or a negative PCR or antigen test performed up to 48 hours before. The vaccine must be accepted in the country of activity. Show more

It is mandatory to present a complete vaccination certificate. The vaccine must be accepted in the country of activity.

The activity takes place with a guide that speaks in English and Spanish.

Pick up from hotel (only accommodation located in central Rome).

Transfers by bus or minivan.

English speaking guide with expert knowledge of Christian history in the catacombs of Rome.

Entry to the Rome Catacombs.

English speaking escort during the rest of the tour.

from
US$ 56.40
No hidden fees or surcharges
Free cancellation up to 24 hours before the service starts
Book

9.30 / 10 588 reviews
If you're passionate about Imperial Rome, entering the Arena & the Colosseum's underground areas will be an unforgettable experience. Plus, you'll also visit the Forum and Palatine Hill!
US$ 67.70
Book
like

8.80 / 10 239 reviews
With this shuttle service between Ciampino Airport and Rome, you'll be in the centre of the Italian capital in less than an hour. The eternal city awaits you!
US$ 6.80
Book