The Pantheon of Agrippa, also known as the Roman Pantheon, is one of the architectural masterpieces of the Italian capital. It is the best preserved building from ancient Rome.

The construction of the current Pantheon was carried out during the reign of Hadrian, in the year 126 A.D. The name of Agrippa comes from the place in which the current building is built, which was previously occupied by the Pantheon of Agrippa, built in the year 27 B.C and that was destroyed in a fire in the year 80 A.D.

At the beginning of the 7th century the building was donated to the Pope Boniface IV, who transformed it into a church, in which function it currently finds itself in a perfect state of preservation.

The most surprising aspect of the architecture in the Pantheon is its measurements: the circular building has exactly the same diameter as its height: 43.5 metres. The dome, which has the same diameter, is bigger than that of St. Peter's Basilica. At its top, a 9 meter diameter opening allows natural light to illuminate the entire building.

The rectangular facade that hides the enormous dome is comprised of 16 granite columns which are each 14 meters in height, on which the following inscription can be seen: "M.AGRIPPA.L.F.COS.TERTIVM.FECIT", which means "Marcus Agrippa, son of Lucius, built this temple when he was a Consul."

In the interior of the Pantheon the tombs of numerous Italian kings and a multitude of art works are found. The best-known person who can be found buried in the Pantheon is without doubt the painter and Renaissance architect Raphael.

The outskirts of the Pantheon are usually full of people at all hours, either photographing the imposing building or having a traditional supper in some of the terraces of the Piazza della Rotonda while they enjoy the shows put on by different street artists. 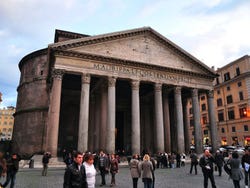 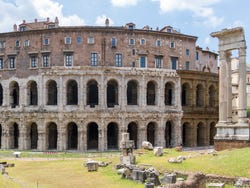 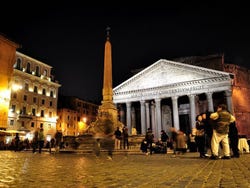