If you're passionate about Imperial Rome, entering the Arena and the underground areas of the Colosseum will be an unforgettable experience. In addition to visiting the Colosseum in its entirety, this tour will take you to the Forum and Palatine Hill. 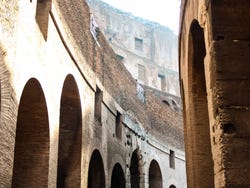 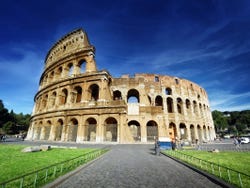 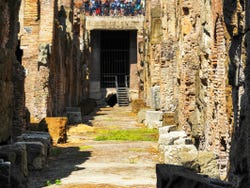 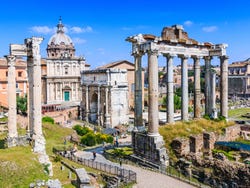 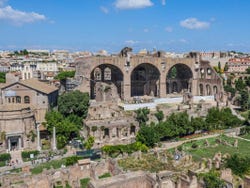 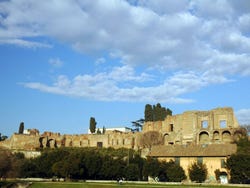 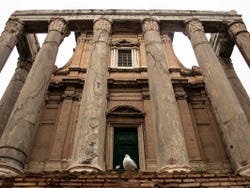 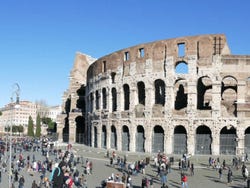 The tour starts next to Rome's Via Frangipane. Skipping all the queues, we'll start the tour by visiting the Gladiator Arena, where we'll spend 15 minutes learning all about the games, events and fights took place there for almost five centuries.

From there we'll descend to the underground tiers, the most enigmatic and special part of the Colosseum. For 20 minutes, we'll walk through areas where two millennia ago the gladiators prepared to fight. As we follow the footsteps of these ancient warriors, we'll discover the keys to this section's architecture. There we'll also learn how the elevators that gave access to the Arena worked and other parts that we dare not reveal before the tour.

Continuing on our guided tour of the Colosseum, we'll walk through the different upper tiers of this symbol of the Italian capital, declared a World Heritage Site.

Leaving the Colosseum behind, we'll pass by the Arch of Constantine and go to our next stop, the Roman Forum, one of the most important public spaces of the city in the imperial era. Here, we'll admire the incredible temples and buildings built by emperors such as Marcus Aurelius and Trajan.

We'll finish the route by visiting the Palatine, the hill that houses the archaeological sites of the ancient residences of the Roman emperors. Conveniently, it's also where you get the best views of the city!

Skip the line entry to the Colosseum, the Forum & the Palatine Hill

Access to the lower or underground tiers of the Colosseum

Small groups of 20 people or less

US$ 67.80
No hidden fees or surcharges
Free cancellation up to 24 hours before the service starts
Book

Very Good Tour! Would highly recommend! Reneta was an excellent guide and so knowledgeable

We had an excellent tour of the Roman Forum, Palatine Hill and The Colesseum (including the underground levels). Our guide was Matteo and he is the best of the best. What an amazing, passionate tour guide. He structured the tour well and broke down the history for us so well. He really brought these ancient ruins to life for us. We love our Roman history and his tour was simply fantastic. Highly recommended

Such an interesting tour going through the history of Rome. Our guide, Dennis, was a pleasure to be around. Passionate about history, smart, funny and so nice.

Amazing guide Lisa from Ireland who has a degree in Italian and an amazing level of knowledge on the Colosseum and Forum !! Enjoyed every minute with her. Thank you

Vasco did a great job today, reality appreciated the tour!

9.30 / 10 774 reviews
The city of the Caesars, of Baroque and, of course, The Eternal City. Discover Rome with this free walking tour of the Italian capital.
Free!
Book