Discover the secrets of St. Peter's Basilica with this guided tour. You will admire some of the most important artworks in the world, such as Michelangelo's Pietà. 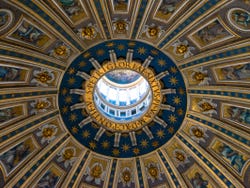 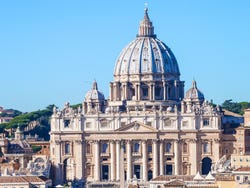 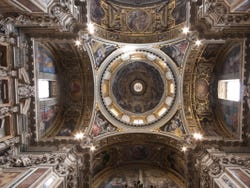 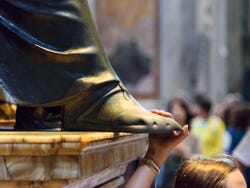 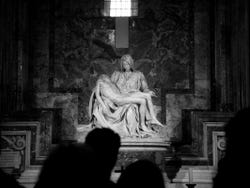 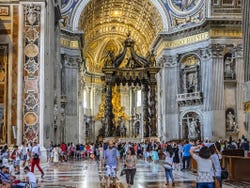 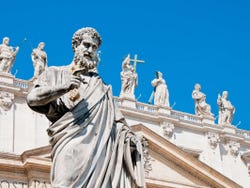 After meeting up at the scheduled time at the entrance to St. Peter's Basilica, we will enter the building to explore all its corners with a guided tour.

For an hour and a quarter, we will stroll through the temple, discovering why it is the most important Catholic shrine in the world. You will hear fascinating facts, such as how long it took to complete and who contributed to its design. The guide will also reveal many wonderful secrets and anecdotes about the basilica.

Besides the history and architecture, we will also admire the world-class artworks housed here, such as Michelangelo's Pieta, Bernini's Baldachin, and the statue of St. Peter on his throne. Another place that will grab your attention is the magnificent Dome, located above the High Altar and the tomb of St. Peter.

The trip finishes by visiting the Chair of St. Peter, a wooden throne made by Bernini that, according to legend, was used by the first Pope of Christianity whom it is named after.

Tours or activities will not consist of more than 15 people per group.

Wheelchair accessible. This must be indicated in the reservation. Accessible toilets. An accompanying person is required.

US$ 31.20
No hidden fees or surcharges
Free cancellation up to 18 hours before the service starts
Book

Free! Free cancellation up to 18 hours before the activity starts. If you cancel under this time or do not show up, you will not be refunded.

It was as described! Dora (our guide) was very good!She knows everything from the city and mainly from Vatican!

A real delight, a master lesson in the history of Rome, amazing Andrea, the Wikipedia of Rome and a super friendly person and as for the charming and very professional driver, for many years and many cities we have hired services from Civitatis and we can only speak well and recommend them. Opinion translated. Show original.

The guide is very nice. Good explanations. It tells you the most important of the square and the basilica. It is highly recommended Opinion translated. Show original.